The blue one is gluten free.   The other was carrot.  I am told it was good too!  (Sticking with the gluten free diet for a while!) 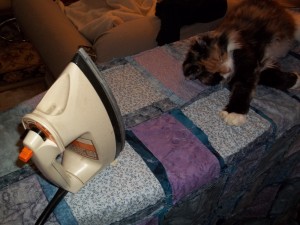 I started a quilt for my mother in the hopes of getting it finished for Mother’s Day. Life and other minor annoyances were not co-operative!

So I have maybe four squares left on the massive quilt I started  a year ago.  I started hand quilting  because the sewing machine I have is a loaner and I like to imagine I am a princess locked in a tower.

I have learned a lot.

I have realized that I am more of a “glue it” type of crafter.  In the journey of life I am a set designer, not director, or a writer.  I don’t build things that last but I do like a bit of splash!

This is the zombie cake I made for my daughter’s boyfriend.  The idea was easy.  The filling was red velvet cake, the base, chocolate chip chocolate cake.  The eyes were yogurt covered almonds and the brains were banana mallow candy.  Yum!

What should I do for my daughter’s birthday?  I have no idea.  I guess I have to watch Ace of Cakes for some ideas.