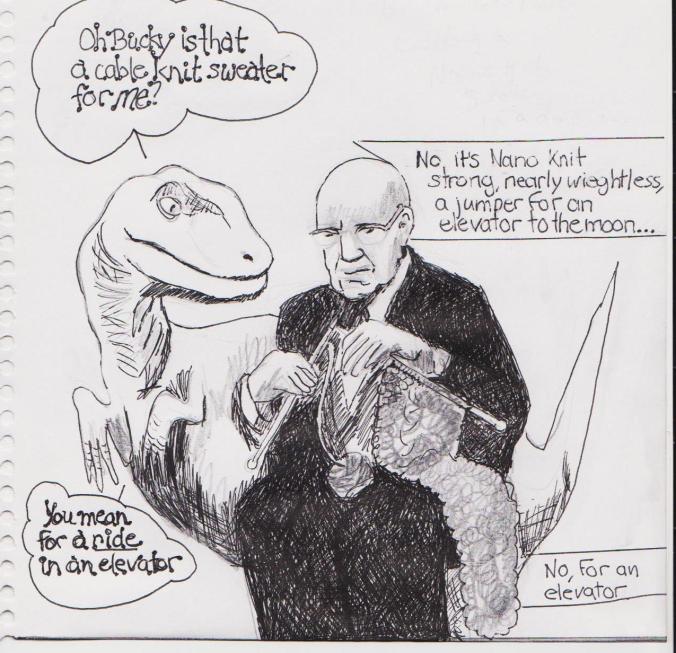 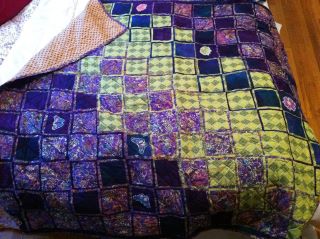 Got a better pic of the first quilt.

This has lead to two more quilts and a bag.

I have toned it down a bit, just a bit with the last one. It  got started because dear old mum liked the second one that was already promised to someone.  It is all kinds of blue from the greenish end to the purplish end and perfect for her room.

I will have lots of scaps left over for some more bags too and plenty to keep me from mindless munching over the winter. The beautiful fabrics and colours help keep the S.A.D.s away! (I also use a S.A.D. lamp, great light to work by!)

They say one addiction often replaces another, in my case it was corn chips.

I have it hanging by my desk. I got it for making a donation to SickKids at Home Hardware. It was in a drawer until recently but I thought it would be handy. I have been busy-er, not normal human busy, just on the brink of NOBODY MAKE ANY SUDDEN LOUD NOISES I think I will spend the day in my pj’s, oh I am exhausted, busy.

I went out to the kitchen to tell G. D. about it and found she was half finished empting the dishwasher of dirty dishes. To be clear, she was putting the dirty dishes on the shelves.  “Oh, I guess they are all dirty…oh hell.” Then she said, ” I missed a day too! I have been taking only that one pill, you know, the easy one, and I haven’t had a stomach problem for 4 days!  Now there’s only 2 kinds left to try. OH I wish I tried the worst one first!”

I won’t tell you about trying to make pumpkin pie. It is too ridiculous.

We had a wonderful Thanksgiving Dinner at my daughter’s place later .  We knew it wasn’t really the real Thanksgiving Day, Canadian or American, or 2010 or 2011, it just worked out that it was the day we could all get together.  As I explained to my kids when they were young, the Faeries only really do things to watch us get upset so the secret is to not get upset.

It also helps if you don’t celebrate holidays on the usual days. They can’t ruin a holiday if they aren’t expecting it! 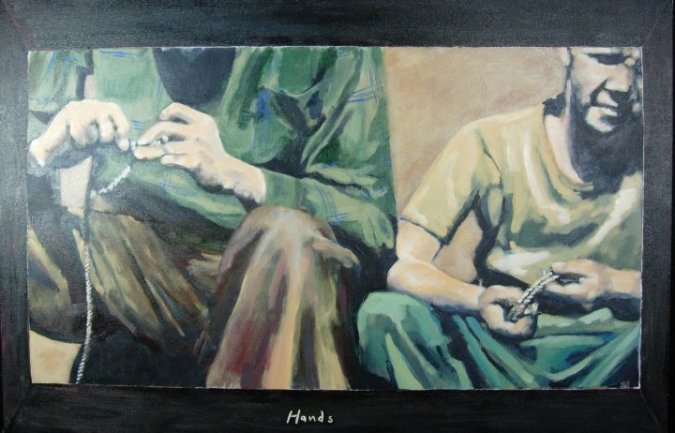 My father and brother, many, many years ago, before I was born, in the Yukon.

For the most part people were wonderful and happy to excercise their right to vote.  A few seem to regard it as an inconvenience but fewer than you might think.

An elderly lady told me she was so happy to live here, that where she was from she could not vote.  It was a wonderful thing that she took the time to share that with me. I thanked her. (She did go on to complain a bit about young people…oh well.)

It was a good day. 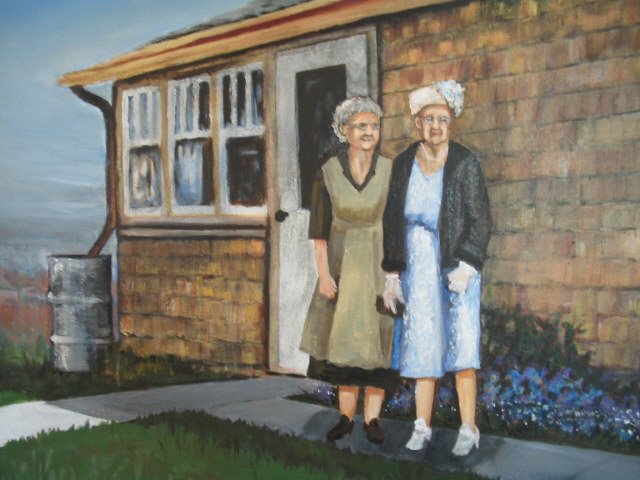 I had a relative state an interest in my paintings so I thought I better start to post some more of them here!

This I did a long time ago.  Family resemblances are fun.  I find as I am getting older I am aquiring a generic look.  I also find that I share that look with both the males and females, as if you could plop a wig a hat and some lipstick on us all and we would pass for each other, or one of these ladies!