Okay so i finally met a doctor who has seen what i had, once. It is fairly rare and usually happens as a complication of something else like blood thinners or surgery but it can also happen for no apparent reason. It is called a rectus sheath hematoma and you can google it.

I guess i had a #2 cause they told me 2 to 4 months recovery. (14 cm x 7 cm bleed) No bike riding.  Rest and iron pills and maybe cold compresses and Tylenol. Yay summertime is ruined, again.
I will see a surgeon in August to discuss if anything needs to be done, probably not. “The good news in your case is it probably was just bad luck.” So much for those lucky socks i got for xmas.

On Sunday my daughter came over with her two wee ones and we ordered Swiss Chalet. It was my choice, not cheap but consistent, and kind of a Mother’s Day tradition. The driver came, I said, “hold on I have a tip for you.” He thanked me and 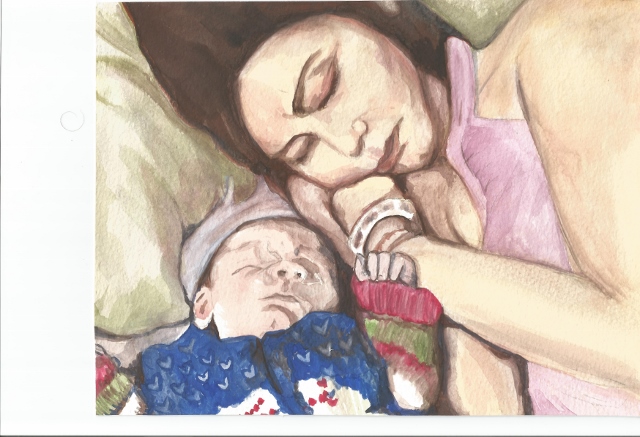 I did not argue.

I don’t want to think about it,
manage mostly to forget and,
besides,
nobody else knows.
I look good enough, I smile and I’m fine.
You know I always prefer clothes with pockets and
when i get nervous, well,
I hide my hands.
And there it is,
my fingers slip around it
dried to a hard stone
and soon I’m dissolving in shame
enough to rehydrate a desert.
But you say
that’s just me being dramatic.
You’re fine too.
This was never your heart.

Winter, the air was as dry as unbuttered toast.
Ice formed from any moisture and hung onto any thread.
Children were bundled so if they fell
it would be face up
so they wouldn’t suffocate,
their identities unknowable behind scarves and hats pulled low.
Until a Chinook
when they threw off their stiff winter clothes
and ran in their socks and shirt sleeves
in yards of mud,
no, not ran, but hopped
like new little toads with tails abandoned,
this way and that,
with the randomness of joy.
And when it was over
they came home dressed in other children’s clothes.

I joined the Rusty Cast-Iron April Poetry Club, a closed club on Facebook for the month of April. I tried to write a poem every day. Some days I pulled old poems out of the moth balls and re-worked them. Honestly, it was really hard and time consuming. Whole mornings were taken up with my punching and kneading the raw dough! But it was an honest effort. I am going to post some of the ones I am happy with. NOT ONE A DAY, but maybe one once in a while. Thank you dear reader for you indulgence.

This was Day Five, I think the prompt was to write about a micro climate, which this is not, but it is about a climate aberration… We did experience something like this the first winter in Ottawa.

I joined a closed group on Facebook for A Poem A Day this month!

I got SO OBSESSED with checking to see if I got a like I had to leave my phone at home, (crazy really, what if I had another fall?) but how could I complain about young people on their phones constantly if I was doing the same?
I spent a morning
writing a poem, good or bad,
it was wonderful.
I know so many people in pain. Angry, and old and watching everything change and fighting with their grown-up children–if they are lucky–many never hearing from them any more, telling me how all their work for love has come to this. And I can’t do anything but nod and drink my Tim Horton’s coffee. I can’t tell them how I spent my morning, ashamed to be so happy. I can’t tell them:
“when you were young,
before you could write a poem,
you were a poem”.