I am in that weird place in life when I have lots of time to just observe things. I see when the wheel on the wagon is wobbling but it’s not my wagon.

Not any of it is my wagon.

I just try to appreciate every moment and applaud every success. “Yay!”

Crazy people, cruelty and all the other painful things humans can perpetuate on each other, hatred, confusion, obscuring the way forward; It is a crazy time. Maybe it is always a crazy time.

I find zazen, sitting staring at a blank wall excruciating, but preferable to action often because I don’t know what I can do in the face of so much suffering. I know I am probably getting my practice completely wrong. I imagine Bodhisattva cringing. I remember teachers telling me not to talk about my practice outside the Dokusan room…

The other day the bus was so full the driver told us to try to get on at the back door. It looked impossible and I was the last in line. All these backs towards me, every shade of skin a human can possess represented before me, me, covered in liver spots and freckles. For the doors to close, fat, thin, male, female, shy, brazen, tall, short, young, old, we had to smoosh together.

“Well, we are all good friends now!” Laughter and smiles, people looking over their shoulders at me in the crush, somehow making room for me where there was none.

It is never a personal Titanic on which we arrange the deck chairs.

in the morning light

My garden consists of pots filled with the rejects of small grocers and hardware stores, usually marked down to a ridiculously small amount, to the point that I could not help but be tempted. I grabbed them, put them in whatever bag, or pocket and carried them home.

I am going to have a lot of green tomatoes, the temperature is dipping lower every night and the air has the fresh bite of a Canadian Autumn coming: I will make some salsa.

They feed my soul, or at least the part of me that appreciates the late bloomers. 🙂

We didn’t have a map but if we had a map it would have said, “Follow the path along the fence, cross a sea of wood chips in a boat, take the path through the forest, come to a big red number two.” (I didn’t get a picture of it but it was big and red, two things that are very significant to an almost two year old it would seem.) 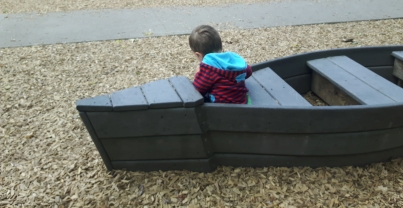 MUSING BUT NOT AMUSING?

I have been imagining all the things that I could do now that I am no longer responsible for anyone else.

I still have my crossing guard job and within the three hours a day I am occasionally responsible for getting people (I wish more children walked to school) safely across the street.

Some adults think it is hilarious that I am crossing them. “I feel like a kid again!”  Some think it’s annoying.  I scold them when they are too impatient for the light to change and head out ahead of me on the red. I don’t tell them I have years of looking after people who were either looking forward to being independent, or looking back on the loss of it and so no stink eye of the type one might expect from a teenage is going to thwart me…

I didn’t look after kids or my mother for the approval I would gain.  That was good too because being a caregiver is really hard and often criticized by those who have never been one but know a lot about it from watching television. Although it was nice when  appreciation was expressed, it came, less often than it would in a television sitcom but more often than I probably remember.  (And I am sorry for this, truly.)

I just like knowing what needs to be done and then doing it.  It feels good. There, I said it.  I am not a self sacrificing saint or anything like it. I am just a person lacking in imagination.  Maybe. Maybe that is it.

So while I would like to sell everything and go and stand on the front lines of some injustice, other than getting hurt I don’t think I can contribute much; Or finish the two books I started to write when I was younger and smarter and able to drink more than one cup of coffee a day without a gastro-disaster; or finally finish that enormous painting I started (what was I thinking?) that is facing the wall as if the painting was ashamed and not me, it kills my back to stand and paint; Or try to learn to speak French, something that I found easier when I was still drinking wine, *sigh*.   None of these things will likely happen.

The anniversary of my mother’s death is rapidly approaching and I promised myself I would give myself a year before making any major decisions.

I am no longer responsible for anyone else. I come home exhausted and eat one of the frozen meals I made on the weekend and then do some hand sewing while some really violent Netflix show plays. It is the only way I can watch some of these programs.  If I actually look at the screen too often,  OMG, PTSD.

So I bake cookies when I am unsure, maybe I’ll manage a trip to see my Old Teacher over the holidays, bounce my grandson on my knee. And follow my favourite blogs, those that make the world still seem a place full hope and beauty and adventure, and good will for all.

I realize that it “ain’t rocket science” as the woman who trained me said but it can be demanding, especially at rush hour at a four way intersection in a busy downtown area.

There are many pleasant things about it, not the least of which are seeing all the everyday human interactions that are for the most part lovely. People can be very kind.

-a woman  tells me after I ask if she would like me to cross her that she went to the school as a child and crossed this very intersection with a crossing guard, and “here I am feeling eleven years old again!”
-an elderly lady says she doesn’t live around here anymore; Her friend and roommate died and so she came back to the old neighbourhood, because “you can’t be all alone feeling sad, you have to get out.” She had just been to visit the owner of the convenience store who she told me was “the nicest man on the planet.”
-people with walkers and canes and wheelchairs smiling and saying thank you and you can see that they are, despite pain and difficulty, grateful just to be out and pushing themselves to remain a part of the fabric of the neighbourhood, and people with issues with reality, with their minds, doing the same
-numerous and sundry people thanking me for being there, their hope that I would be placed there as a permanent crossing guard, (some introduced themselves and their children and asked my name)
-I see people parting for the day with kisses, I see people enjoying the sudden warm Autumn weather at the coffee shop patio reading their papers sitting in the Muskoka chairs that are lined along the wall. The gaggles of pre-teenage girls plotting and pruning and laughing, the boys perpetually uncomfortable and posturing, the dog walkers, the harried parents and bubbling babies and bouncing and fidgeting children, the late ones, the ones who keep their heads down, the ones who smile like other worldly beings, wise and gentle…

There is also a pretty awesome graffic on the the wall across from me.  Can’t post a pic but I will take note of the signature and pass it on later.

I find each rush hour intense. The drivers are in such a rush it is at times exhausting to keep an eye out for potential issues but I am sure it will come naturally after a time. It’s funny how some A.Hats will give me a WTF because I am walking as bright as an orange with my sign and vest to the curb as they are trying to WHAT? PUSH ME OUT OF THEIR WAY WITH THERE BIG STUPID HIGHLANDER TRUCK? because they Have to Make a Right TURN NOW!!!…? in a school zone when kids could run out at any time in front of their impatience and then change a whole bunch of lives for the worse? So I shrug my shoulders and make each step count as I step to the curb and lower the sign and smile.

Humans. But these are humans in large fast moving vehicles that weigh tonnes, trying to get to their next big mistake EVEN FASTER. 🙂

I hope I do go back to this crosswalk next week.

painted on a burning sky

This is a link to Urbpan’s post about his guided nature walk around Cedar Grove Cemetery, which I think is near Boston. 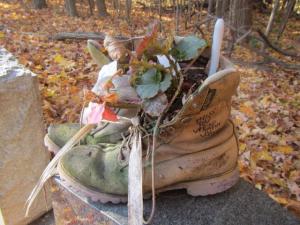 I had a conversation about “sentiment” recently and how to make “place” and space for objects that reflect things that signify important remembrances. This is something that humans do, out of (almost?) all other animals.  However, often things just get piled up and instead of being beautiful and significant they become just a confusion of “stuff” and garbage.

This pair of boots with plants growing out of them are like a poem of remembrance and a recognition of impermanence. They stand in perfect contrast to all the cold stone markers.